tracking changes to three months ago and two years back

Quarterly Review: The talks are again about price controls. While earlier in the year the president rejected a parliamentary bill that controlled food prices and courts have stalled the controversial health care bill. But now there is now . There is an alcohol bill, which some the Star eluded was crafted by the national drug abuse agency with strict hours of drinking and this week the minister for energy gazetted rules for petrol prices

On to the index

Beer/Entertainment: A bottle of Tusker beer is Kshs 140 ($1.75) compared to 170 three month ago. It was 140 a year ago, and 120 two years ago. It is widely believed that bar owners are struggling with the reduced hours of alcohol sale of 5 – 11 PM on weeknights and 2 – 11 PM, and there is room for shady arrangements to extend the hours.

Fuel: A litre of petrol fuel (at local petrol station) is now Kshs 94.3 ($5.28 gallon) about this same as 94.5 three months ago, It was 83.5 last December and 92.7 two years ago. The price was 97 until Tuesday when the new rules came into effect, and as the business daily noted, the drop in petrol prices was offset by increase in diesel and kerosene prices. Price controls have been resented across the board but the populist wave won and it will be interesting to watch how the government will respond to oil prices, and the join import tender system, to appease the refinery, pipeline and oil marketers in addition to the public 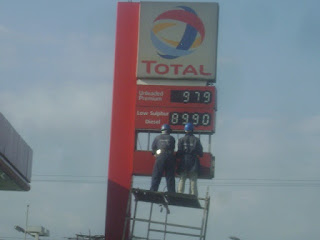 Staple Food: Maize flour, which is used to make Ugali that is eaten by a majority of Kenyans daily. A 2 kg. Unga pack at Uchumi today costs Kshs 69 ($0.85) compared to 65 three months ago, 83 a year ago and 97 two years ago. There have been good rains this year and good harvests, but which lead to farmers wanting the government to buy at higher prices. And there was a strange story of the government importing maize form Japan

Other food item: Sugar : A 2 kg. Mumias pack is Kshs 195. It had been two hundred for over a year, but two years ago it was 160. The tug of war about the licensing of as sugar company in western Kenya has highlighted some challenges of the sugar sector regulation.

Communications All Kenya’s mobile phone companies have call rates of about Kshs 3 shillings per minute to call across networks. What has changed is the offering of more value at the same price and significantly blurring of the lien between pre-paid and post-paid services - through offers for subscribers to sign up for ‘unlimited’ or enhanced call, SMS, or internet services by sending in text messages and these in turn entail daily deduction of money. By offering these packages, mobile companies are assured of steady revenue from a subscriber even if he does not use the service on a given day and continues until a customer deactivates the promotion

Foreign Exchange: 1 US$ equals Kshs 80.5 compared to 80.8 three. A year ago it was 75.6 a year ago and 79.0 two years ago. Presently Kenyans are riveted by the Wikileaks Kenya cables that are slowly being disseminated