Quarterly Review - Young population: The results of the Kenya's national census done in 2009 were released last month and the results are still being interpreted. Politicians obsess on tribal numbers, economists caution on birth rates, while businesses can look to demographics like the number of mobile phone owners, the number of youth in the country, along with other intriguing findings such as the population of Kibera (largest slum in Africa) being 1/3 of previous claims, and remote Mandera is the 4th most populated constituency in Kenya (after Embakasi, Kasarani and Juja which are all in Nairobi environs). It confirms other findings like the Safaricom 2010 A/R which notes that “…with the North Eastern
region’s economy growing by over 200%, owing to improved security & enhanced economic activities, the area is no longer ‘served’ from Nairobi.”

Price control: A price control bill was rejected by the President who referred it back to Parliament for amendments.

Costly Health Insurance: The National Hospital Insurance Fund set in motion a plan to roll out a rather expensive health plan by increasing mandatory deductions from 320 per month to up to Kshs 2,000 ($25) for anyone earning over 100,000 ($1,200) per month. The matter has been challenged in court and the agency has been accused of not consulting widely with other health sector players and employers in a bid to revive earlier health bill

On to the index

Gotten Cheaper - Staple Food: Maize flour, which is used to make Ugali that is eaten by a majority of Kenyans daily. A 2 kg. Unga pack at Uchumi today costs Kshs 65 compared to Kshs. 71 three months ago and 84 a year ago.

Communications: All Kenya’s mobile phone companies have call rates of about Kshs 3 shillings per minute to call across networks. Exactly a year ago Safaricom has launched super ongea tariff, which promised rates of as low as 0.8 shillings, but from a base of Kshs. 8 within network. What has changed? The arrival of airtel in Kenya who will pursue a low cost high volume model though outsourcing of services among other measures. i.e. today it was announced in India that they will sell their African mobile base stations to a subsidiary company (Bharti Infratel) that will re-sell them to private equity funds.

Even as Kenyans have celebrated the new chap call rates, Airtel have ruffled many feathers in the last month, forcing Safaricom and the other smaller mobile companies to match the very low tariffs, and this has been called unsustainable by some, a dis-incentive to investors by others, and even a situation which may result in a mobile operator closing shop. Two years ago, Safaricom had launched 'ongea tariff' which was a Kshs 10/= rate

Other food item: Sugar : A 2 kg. Mumias pack is Kshs 200, unchanged over the last year. Two years ago, it cost 145, a price we may see next year when the COMESA regional sugar quotas are done away with. Already, leading sugar company Mumias has diversified into electricity co-generation, bottled water, and soon, ethanol production.

Beer/Entertainment: A bottle of Tusker beer is Kshs 170 ($2.1) (at a local pub) compared to Kshs. 160 three months ago. However it is tough to find a perennial location to keep track in Nairobi’s fast changing pub scene, where even Nairobi’s favorite sports pub Hooters closed last month. What needs to happen is a combination of Murua’s Tusker Index with this interactive beer map from the Czech Republic! 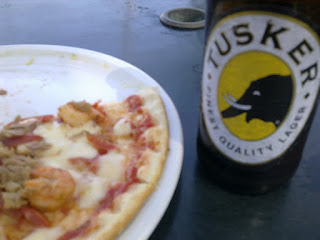 More Expensive - Fuel: A litre of petrol fuel (at local petrol station) is now Kshs 94.5 ($5.25 gallon) up from Kshs 90.9 per litre in June. The back and forth petrol war continues between leading oil distributor Kenol and the Ministry of Energy officials who include the Kenya pipeline company, the Kenya oil refinery and the energy regulatory commission about the issue of preferential allocation of space and who owes who more. On their side Kenol can count on some political muscle, the fact that they blew the whistle on Triton Oil before it collapsed, they are the country largest corporate taxpayers. High prices at the pump are not unusual, as two years ago petrol was retailing at Kshs 101

Posted by bankelele at 5:04 PM

That's quite an elaborate observation. how about land or house rent how does it compare? I think it has also gone up significantly. Unless one is paying a mortgage where the monthly costs are constant.

I have a simple question, how do you know all this ? Is it job (analyst etc) related or a thing on the side because a large majority of Kenyans seem to have narrow concerns. Do you surf read or are you connected. Just curious

As usual, great analysis. Could those with forex knowhow tell us why the shilling is getting weaker by the day?

which pubs do you visit my friend.