(i) Tracking changes in the three months since June 2009, and approximately one year and two years ago
(ii) also the job/other opportunities column is back

Gotten cheaper
Communications: leading mobile company Safaricom this week launched Super Ongea, a zoning tariff that eases congestion on the network by offering different rates from the then low 8 shillings per minute (now the high) to as low as 80 cents per minute. This they hope will ease congestion on the network and also hold on to some customers who are flocking to the cheaper new provider Yu (Essar telecom) who have very low rates. Zain and Orange have gone slow on the marketing front, and this week the Orange CEO called for an end to price wars. The new Safaricom tariff does not affect data or money transfer of which Safaricom is getting a stranglehold with m-pesa and 3G. Safaricom is big seller of mobile phones, modems, and laptop computers, going full blast in data at the expense of retail ISP’s while M-Pesa utilization has taken on a life of its own that makes Kenyans wonder how life was before mobile money transfers started three years ago.

About the same
Fuel: A litre of petrol is Kshs 80.9 (~$4.79/gal) up 11% in 3 months, 1@% cheaper than a year ago and 10.5% above two years ago, so relatively unchanged as thin fuel margins still continue from the price drop of about a year ago that wiped off Triton

Entertainment: A bottle of Tusker beer (at local pub) is Kshs. 120 down from 130 three months ago. Prices seem to have stabilized though and with English football season on now, bars will not be changing prices anytime soon. East African Breweries year-end results showed that beer volumes were up just 1% for Kenya

Gotten more expensive
Staple Food: Maize flour which is used to make Ugali that is eaten by a majority of Kenyans daily. A 2 kg. Unga pack at Uchumi today costs Kshs. 84, 9% cheaper than 3 months, 15% up from a year ago, and 68% up in two years ago. Already there is worry about a grain shortage in the next few months, and the country may have to import some maize while awaiting the harvest from local farmers near the end of the year

Other food item: Sugar (2 kg. Mumias pack) is Kshs. 200 up 14% in 3 months, 38% in 1 year, 33% in 2 years, though it’s hard to say if sugar shortages are genuine or artificial; the annual importation exercise is a tug of war between politicians, tax man and importers.

Electricity/utilities: this month’s bill is Kshs 1,900 compared to 1,500 from three months ago. Still I can’t complain since compared to what some residents pay . The electricity rationing seems to have ended but at a cost since the new electricity is generated from more expensive thermal sources. The clean energy planned for Kenya- wind (Turkana, kengen) and sugar (Mumias), and mini-hydro’s (KTDA) will take a while to be felt in our bills. 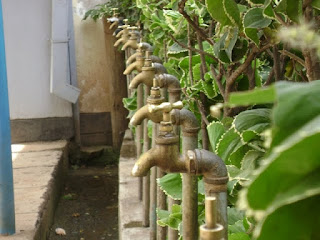 Water rationing is still on going and the Nairobi water company said bills would increase from July 2009 onwards by about 50%.

Opportunities
most from the daily papers this week

Tenders
The Kenya Government has asked all ministries, agencies, parastatals to e-mail in soft copes of any tenders or procurement notices they advertise in the newspaper. This will be displayed at a government procurement portal.

Despite Safaricom's controversial, no frills, AGM, Kengen, the company with the second largest shareholder register (216,000) after Safaricom, is not going to let its members go home empty handed. They have a tender at their site for
supply of agm goods & services that closes on 24/9

Thank you for posting this valuable information. I also like the positive twist you add to your blog which certainly bucks the current trend of negativity in the Kenyan political & societal climate. There is alot of good in Kenya if only we can learn to focus on that while we work on fixing whats wrong. Once again thanks again for the info and keep up the good work.

@Jellyfish: Very easy to say when you are not in Kenya but a developed country... Today, I lugged up 6 (six) 20-liter jerricans up 3 flights of stairs... (Gives you an appreciation of those who lug jerricans over miles)

I had to drive over to a friend's house coz he has borehole water... It costs money (fuel + his capex + his diesel generator + wear & tear on my car)...

I am buying drinking water from Nakumatt...

I bought LPG last week at an inflated price coz there was/is an impending shortage...

Give me solutions... that fit my budget... not platitudes about how I can make a change if I think positive?

Those who tread the path of open protest get vilified & suffer...
Githongo
The poor sod who exposed Goldenberg
Jacinta Mwatela (CBK)
Martha Karua (even her...)
Wangari Mathaai (especially her...)

I blog to expose shenanigans... Look at my blog posts on the oil scams... but I do not have the same pedestal afforded alfie mutua...

Am I the only one who thinks that it is RIDICULOUS and perhaps sadly ironic that The British High Commission job (communications support officer job which includes supporting in developing & maintain a website and a blog) is only accepting snail mail applications??