Kenyan Guide to the Hague

Arriving at Schipol, you can take a taxi to The Hague (around € 45) or for the budget conscious traveler, you can take the train (€ 7.90) to go to the Hague. Within The Hague, transport seems to consist of many, many cyclists, trams and cars. There are two bikes per Dutch person in the Netherlands, but despite knowing that the Dutch use bikes as the main way of getting around within the towns, it’s still a surprise to see all the people cycling to work, to the pubs, to the stores and pretty much everywhere.

When crossing roads, keep an eye out for the bike lane, the tram lane, AND the car lane. And you might want to obey the traffic lights as well, as the pedestrians also wait for the pedestrian crossing light to turn green before crossing, even in the absence of incoming cars. When being driven within The Hague, you might decry all the “wasted” driving lanes that are taken up by the bicycle lanes, but there is no overlapping from drivers into the bike lanes as the cyclists also seem to have significant cycling rights.

For accommodation in The Hague, there are a range of hotels to choose from. The Ibis hotel, part of an European chain is a pretty safe bet (€99 before tax), and is an environmentally friendly hotel , no frills hotel. Prepare for sticker shock for meals though as breakfast goes for €15.

You can get around even if you speak no Dutch, as almost everyone in the service and retail industry speaks English. Window-shop in the Noordeinde area which has really high end shops located near the Noordeinde Palace. Make sure you soak in the old architecture while you’re there (Google says the Palace was built in the 16th century). The real shopping takes place in Grote Marktstraat where many retail electronics, clothing, shoes, bath and body retails chains have stores, and there are plenty of small shops that sell the distinctive blue and white Delft pottery. 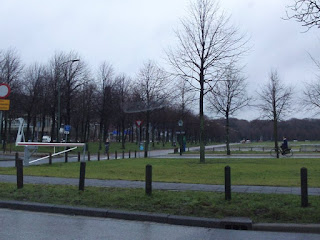 To get the full tourist experience, take a day trip to Amsterdam which has great shopping and tourist attractions. The Van Gogh Museum and the Rijk Museum are must sees. For sightseeing and shopping, a good place to start is Dam Square where shops are flanked by waterways, and with tourists attractions like Madame Tussauds . Many of the international chains have retails stores in this area. Amsterdam isn’t of course Amsterdam without a visit to the Red Light District, so if you can, try and see that as well.

Biggest surprise about Holland? That the dikes aren’t brick walls that prevent the sea from flooding the country. They’re more miles and miles of mounds of earth. Oh, and this boy? He never existed as part of Dutch history. It’s an American children’s story!

Posted by bankelele at 2:49 PM

99 USD at IBIS - much better than 5 stars hotel mentioned in Nation.

I doubt the Ocampo 6 will ever visit Amsterdam !! If they do, they better not shop for postcards :) otherwise they will have to tour the country again, when back in Kenya, with preachors asking for forgiveness because sex is bad, I mean as bad as killing people.

TheBigBoss: All that fanfare by MP's for two hours in court where they did not feature? I hope the live feed puts more perspective for the public and for the accused, that this is not a joyride

Amsterdam and Hague is bloody expensive...recently passed buy and at Mcdonalds paid $ 4 for a small coffee which costs 75cts in the US. sucks to be in the euro zone. Apart from the pleasures of Amsterdam if you know what i mean, keep off.

Most Kenya MPs are leeches but elected by Kenyans... Ergo...

trust in the six to soon be realy conversant with those fares...ha ha.best advice would be to take a cab drivers's number just incase..ha ha

Anonymous who bought the 4$ cup of coffee :-) Hehe. That's not expensive in euros, it's the dollar that's doing badly against the euro. That's pretty much the price of coffee in Europe.