Can Africa Profit from the World Cup?

I was supposed to write a piece on business opportunities for the 2010 World Cup for Kenya; however the notice was short and though I started research, I never got to finish it by the deadline. Also I lost my notes and forgot about it, till I was jolted back by an e-mail from Emirates Airlines yesterday advertising world cup travel packages that include airline tickets, hotels selection and, most important, specific match tickets. I tried one and it came to about $4,000 to watch Algeria vs. England.

Back to the post, so besides global giants like Sony and Coca Cola, what other opportunities are there for Kenyan and other African nations & companies?

Airlines: while Emirates is the official partner of FIFA and can put together packages, their passengers flying to SA have to route through Dubai. Meanwhile local airlines like South African Airways, Kenya Airways, and Ethiopian Airlines that have huge footprints in Africa can fly hundreds of fans in and out of SA daily.

Road transport: Nairobi is 3,000 kilometers from Johannesburg and which would take perhaps a week to travel by road. Bunson Travels, a Nairobi agency, has scheduled an overland bus and truck transport package to South Africa, with the possibility of match tickets on some of the higher priced packages.

Tourism: The World Cup will draw thousands of people making their first or a rare trip to African continent, which can yyield opportunities for locales outside South Africa
- Beach tourism: The World Cup is associated with summer, but takes place in winter in SA (southern hemisphere), and while the weather will be relatively mild compared to Europe and US winters, its not beach strolling weather like you could get in Mombasa, Zanzibar or Seychelles.
- Regional packages: Ethiopian Airlines has travel packages that cover more than one country e.g. see the attractions of Ethiopia, Tanzania, Egypt, and Kenya and will probably sell those in SA. Likewise Kenya Airways (or local agents) who will probably have travelers from Thailand and China can draw on the same to entice people on the way back e.g. also tour the Great Rift highlands of Kenya and Ethiopia and visit athletic camps to see where world beating Olympic athletes hone their skills. 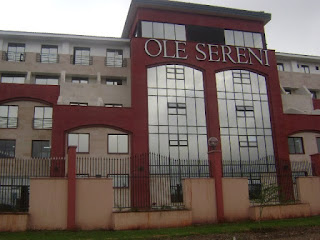 - Nairobi hotels: these are 4 hour flight away from South Africa, and will be much cheaper than the premium priced rooms in Johannesburg next June/July. Seasoned travelers may choose to cool off and wait to minimize their hotel bills
- Sports counter programming: how about an event that takes place immediately after the world cup e.g. an international rugby tournament (safaricom safari sevens?), safari rally or a cross country event.
- Training camps: for teams to practice away from fan and media attention, but in similar climate e.g. Naivasha

Logistics: Looking at the staggering numbers from the last world cup there are opportunities for hospitality, medical, security and other personnel, including K street. In IT support, there will be data, video, broadcast, and programming opportunities all of which will need capacity e.g. at the recent zuku internet launch, the Wananchi CEO bragged about the company having more fibre capacity than the entire current usage of South Africa!

Financing: Three years ago UAP insurance launched a World Cup savings plan (what happened to it?). And while Visa is the official FIFA partner, I won’t be surprised if Equity Bank launches a ‘world cup loan’ package to enable tardy fans to finance a trip to SA.

Curios: Local companies should put their African art and curios online with local companies like verviant And mamamikes, and not have to be there in SA physically to sell them to visitors.

Governments: there are opportunities for proactive governments to get involved and promote their countries with marketing campaigns, or with travel advice for locals, expedited transit visas (JKIA) or passport renewals. See what UK government is doing.

Which other local (non SA) companies have World Cup related packages, or have started, or can position themselves to profit from the 2010 World Cup in South Africa? Please post comments below, but not unrelated advertising spam

Posted by bankelele at 5:28 PM

If nothing else, Kenya should market itself... The 'cooling of' in Nairobi is a tough sell BUT the idea of having the Safari Rally after the World Cup (or before) is excellent...

I hope balala reads your blog

Let folks stop by & take in the rally as an extra!!! They can stay at Kenyan hotels... see the country... & all this while flying on a single ticket...

I thought the old American Embassy was scheduled to be demolished... the by-pass & all...

How did it end up as a hotel?

As far as pimping the country as a potential training venue to World Cup playing countries, the government has massively failed in doing that. This is something that needed lobbying and pre-planning by the Government waay ahead of time and clearly wasn't done.

Actually, apart from a dodgy-sounding committee that was set up (more as an after-thought rather than as a well planned and timed initiative), the Govt & relevant bodies such as KTB do not seem to be proactively doing anything to leverage the hype and hoohaa that comes with the World Cup to positively impact tourism. However, I could be (and in this case hope that I am) wrong...

The TZ govt has done well to get Ivory Coast to train in TZ prior to the World Cup.

BTW, Safari 7s is scheduled for the wknd before the World Cup.

Considering FIFA is one of the most corrupt establishments in the world - my sense is to start from the point of view that opportunities for local and regional industry as well as any lasting legacy from this world cup is superficial at best and flawed at worst.


A pessimistic but realistic view. If South African football (and regional football for that matter) hasn't benefitted so far, and doesn't look like benefitting, what chance does local industry have.

Only a few miles from Soccer City in Jo'burg and the magnificence of the Cape Town Stadium facing the Table mountains - local football teams are still changing into their kit in the bushes - yet white elephants of stadiums are being completed for hundreds of millions of pounds.

our leaders (read balala ) are so far sighted they can only see opportunities in 2012 and not those coming up next year !

Kenya can just market itself as a regular tourism destination, and not necessarily as a stop along the way to or from the World Cup. It will be summer (Europe & US) and tourists leaning towards visiting Africa will still want to travel with their kids during vacation. SA will be chaos then, so why not capitalize on that for June-July?

Nairobi can also be the destination of choice for the numerous conferences that take place in SA every month. Flights to & within SA during the World Cup will be difficult to get & pricey, same applies to hotels. So what happens to the business community? Kenya!

Nice blog, informative articles. As many have said above here, opportunities are present but they have to be taken.

I'm sure Kenyan bus companies can make quite a killing from the region and the tourists who may think it cool to travel through Africa before/after the event.

In my most recent bus ride fom Kigali to Kampala aboard Kampala coach (had Kenyan plates and had come from Bujumbura), there were people who were going to South Africa.

Method:
1. Organize daytime street festivals ove the three months - with bands, music and fun processions.
2. Several concerts (street performers to perform for charity causes like hunger or global warming) - day and night all over the country
3. Organize the most exotic Beach party in the world - at LAKE TURKANA
4. Try get a movie to premiere in Kenya during the festival!
5. Giant screens at Uhuru park/nyayo stadium to show African champions playing in the world cup.
6. Encourage bar owners nationwide (smallest to biggest) to have small events under the theme. Use common decor & symbols (cheaply available or home made).
7. Largest beach party ever in africa in Mombasa. Daytime (family event - with family friendly activities) and big evening parties for adults... More than 10 floating dance floors! More than 10 deejays booths.. over 2 kilometers of party area etc

Coldtusker: can’t hurt to try and market as long as Najib does not step forward and say it will cost one billion shillings to market Kenya!
- There are plenty of roads in front of ole sereni and I think the bypass cuts in front (nearer old st James hospital) (hotel borders the park)

Migz: sports ministry is in shambles and the government fighting off coca cola (a large FIFA sponsor) did not help matters
- thanks, did not know Tz had locked down Ivory Coast team
- oh, the Safaricom safari sevens will be in September 2010 (not traditional June, which would have fit in nicely with pre-world cup push)

Darius Stone: true FIFA has corruption issues. But small local and regional companies won’t have to deal with FIFA (can’t afford to anyway)
- Sad about SA soccer teams not benefiting (DSTV has done some good for Kenyan league soccer)
Mitzy: I guess businesses will absorb the premium flight and hotel prices in SA. South African airways will be operating at three times normal capacity

Rosy: thanks for comments

Coldturkey: agreed, they have to, (and will be) taken

PKW: Hi these intra-county bus trips are really coming along; yes you can fly to many places in east and central Africa, but the cost of $4-500 are quite steep for small business people. I’m sure there will be more buses to South Africa,

Maishinski: you have many ideas, spread the word. Has a beer fest ever happened in Kenya? Except fro safaris events, I don’t think this has been tried, street fairs have been done, rhino charges, MTV awards

By now Kenya has lost it. Those responsible are only engaging in endless debates. am sure we will only get leftovers of the action. http://www.softkenya.com

I think whenever the world's attention is on Africa it's a good thing.

Africans can generate healthy amount of revenue in terms of tourrism....... Cheap Flights to Accra ..

It’s quite appreciable that such information is being shared through a huge network. Keep it up.

tThis World Cup should have the potential to do what the Rugby World Cup did for South africa in 1995. A unifying moment for a nation, perhaps even a continent, still beset with many of the same problems that it had some 15 years ago. Unfortunately as with so many large sporting events now, the power of sport to bring people together and create a platform on which a country can promote itself to a huge global audience is often pushed aside in favour of it’s other powerful ability, that is to generate vast amounts of revenue. FIFA have once again shamelessly taken this oppurtunity and left very little else behind. They talk constantly about leaving a lasting legacy but unfortunately a few football schools and some new pitches is not much of a legacy considering the £2.3 billion that they will take home and the community schools, for example, that they had to demolish in the process. In spite of this I really hope that the tournament is a fantastic occasion and a great success. My other big wish however would be that FIFA take a look at what they have left behind before they go to Brazil in 2014 and ask themselves whether it is a legacy to be proud of. Unfortunately I fear i may be disappointed.

This was some of the best information that I got from your blog. My friend suggested me to visit this blog. Really good one!

Nice and informative post on this topic thanks for sharing with us.Thank you

I love your blog! You will be in our prayers and thoughts!