I am an Internet addict and if you put up a WiFi zone/Hotspot, I'd like to check it out.

I checked into Tamasha (pub in hurlingam, Nairobi) on Saturday afternoon during qualifying for the French grand prix where I hoped to do a live blog of the qualifying hour like ESPN's Bill Simmons who has lived blogged dozens of events like the super bowl, boxing matches and most recently the NBA draft.

I arrived at Tamasha at 3 pm. Ordered a beer and a goulash soup, had them change the TV channel to super sport 5 and also got the network key for the hotspot from the barman.

The connection was very good and I was able to check my mail, check google reader (which is a test of Internet speed, in itself) and even update my anti-virus (took 2 minutes). I did not stay online for the hour (watching the race, typing the happenings, fear of viruses) but was impressed by the connection.

I did a live post of the qualifying hour, but I was unable to edit it within the hour and decided not to finish the post. I also wonder how Ethan was able to live blog every session for four straight days.

After our few days at Ngurdoto Lodge (for TED), I can't imagine checking into another hotel that does not offer Wifi. The days of hotels offering expensive unreliable internet access should come to an end and wifi should become a regular feature for guests. Already Country lodge and Fairview have made it a point to promote their wifi as an attraction. Other hotels may have it but they don't advertise it as a main attraction – and of course they would be for guests only.

What other hotpots are there? JKIA wifi is a bust, there's the elusive butterfly, Java (at Junction, ABC, Adams, Village Market – but only in early morning and late night, except Adams which I am told is all day). I hope to check out Telkom hot spot at Nandos/ Pizza Inn and a Skunkworks session and welcome more businesses to set up hotspots. 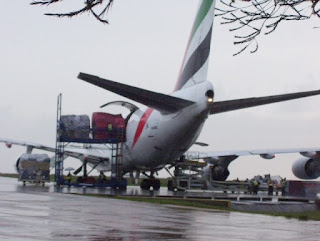 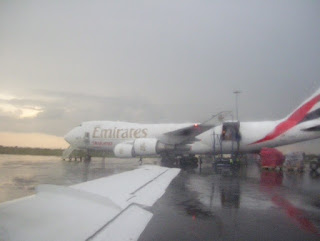 Posted by bankelele at 8:34 AM

Your guys beat our boy. Its all good, he still leads.

farmgal: get your silverstone tickets ready, so you can see LH finish 3rd again. Ferrari's are back, after taking a bad hybrid to US & Canada

Banks, dumb question
-Nairobi has all these foreign channels (through DSTV, is it?)
-if these are live feed from wherever they come from, why is it that they do not have IP traffic ride on the back of these video signals, and thereby, it should be possible to have T1-inish speeds connection from the points having DSTV?

@ Toiyoi, may i attempt to answer your Q?not dumb at all btw. It is possible to have T1 or even upto T5 speeds using satellite uplinks. Problem...sio zetu, ni za kina W. Minefields of 'national security' come up.

Poor banks. If you delay your Nairobi hotel stays because of inexpensive, reliable wifi service, you'll be staying at home for a long time.

Sorry, I don't really feel like paying $100 USD per night just to have broadband access. (@Country Lodge: 65 dollars, my ass.)

Banks, good to hear I will be able to sip a cold one and blog/sort my email at good, ol' Tamasha when I get back..

Last month, I passed by Nando's and they had all the signs indicating their partnership with Telkom for their hotspots...upon inquiry (at "On The Run" Waiyaki Way), the attendants were clueless and pointed out that those signs were "just for advertising". I took a deep breath and stepped away from the sack of old potatoes I had ready to beat that guy with!

Why advertise something and not even communicate it to your staff? Does anyone know if this service is now available at Nandos / On The Run?

Internet connectivity in Nbi is a disgrace. I've just come from java gigiri and it took the whole afternoon (3 glasses of mango juice) just to download my emails. And even then, it hang up.

At least one of my neighbours has their wi-fi unlocked so I have to time when they are online to surf from home. Their connection is fast. I don't know who their ISP is.

toiyoi: no one has doe that. they have focused on their core and probably have not seen the need to make such heavy investments into IP

AfroM: you said it. Isn't that what all the US satlites and telco's did? It look longer than they expected to recoup though and some did not last

E-Nyce: It's only a matter of time, I say. One day there will be WiFi at 680, kenya comfort, blue posts and all small hotels & camps!

Migz: was suprised by Tamasha, but a smart move I say. Pity about Nando's who I was hoping to check out this week.

Ssembonge: Polse, but was with AfroM and Mweshi at Junction (java) last month and they found the speeds pretty good on their laptops. Try there for comparison

Check with me for wifi Hotspot all over Nairobi, Mombasa Kisumu and Nakuru
Sponsered by Kenya Data NEtworks

I asked at Java - apparently, their policy is to shut off wireless at mealtimes to drive people to eating and leaving rather than sitting and surfing. The only do it over what they consider to be peak periods for lunch and dinner.

Aiii, so they closed this? Guess I have been one of those bad customers in the past who just ordered a Coke & a simple burger to enjoy surfing for three hours.

Speaking of WLANs - Banks, I think what you should get is a phone that offers WLAN connectivity so that you can use it as an internet phone. I am thinking of gadgets such as the Nokia E61i or E65 (or the N95, but the E series has a better battery consumption and is more business orientated).

Hi Guys , i heard that Kenya Data Networks has partnered with Nandos(Mobil on the Run) to provide WiFi internet in all their restaurants. Apparently the restaurants owners kicked out Telkom whose services were below satisfaction. Its worthwhile to check it out