- The communications company identified earlier has stopped accepting new investors or deposits and has told existing investors that their contracts will not be renewed once they expire. (I.e. receive full payment)
- Also, in an e-mail circulating, purpoting to be from Equity Bank, names some of these companies and warns other banks and their customers to be on the look out for these schemes.

It has come to the knowledge of the Central bank (and other commercial banks) that some fraudsters have opened accounts in the guise of Merry Go Rounds. Be advised that these are in fact pyramid schemes. A pyramid scheme is a fraudulent system of making money which requires an endless stream of recruits for success.

The fraudsters have already mobilized a sizeable number of people who have made colossal sums of deposits. The security machinery has managed to penetrate the cells and is making good progress in this regard. In some incidents, they masquerade as working with the knowledge of the bank.

We make it very clear that the bank is not involved in any way with their operations. This is the more reason why it has been decided that all these accounts cease from receiving any deposits from the public or allow any withdrawal either from the counter or from the ATMs. Any member of the public wishing to deposit or withdrawal should be advised accordingly.

Refer any enquiries to Major Mutua and Security Department in Head Office.

Please circulate this mail to all your friends to avoid more innocent Kenyans getting into the trap.

New NSE listing?
The Daily Nation reports that a new company will soon list on the NSE via a private placement. Midlands Limited will sell 20 million shares to raise 250 million shillings to put up cold storage facility. Suntra has valued the shares of the agro-processing, Nynadarua-based company, which currently has 3,000 shareholders at 28 shillings and they will be listed at at 10.50 each. Related piece.

- Kenya is bidding to host the 2009 sevens rugby world cup. The organisers, who are up against seven other countries, are deriding the lack of government support. Good luck!

- The 2006 Nairobi Marathon takes place in 12 days. However unlike in previous years where the different races were spread out over different parts of the city from Lenana school, to Nairobi School, to Mombasa Road, this years races will center around the Nyayo Stadium area. 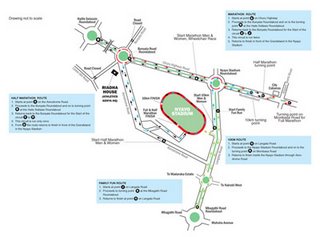 Previous marathons have caused some inconveniend some travellers, church goers, and shoppers, on Sunday morning. However for those interested in watching this prestigious international sporting event will have to go to the race area.

Safaricom security
Safaricom to enhance it's anti-fraud systems.
Posted by bankelele at 6:05 PM

Interesting news about the new listing, by the way also note that MEGA bank is also accepting share applications I think at lots of Kes:10,000.00 but not through the NSE.

About the pyramid schemes be prepared for more versions as Kenyans try to be rich..

Check my blog on The Rogue Broker.

Interesting update on Sasanet! If they do pay off the notes then that is a great return for those who did invest!

banks
If sasanet can meet their obligations, then thats great news for some of us !! Anyways i already knew that they were going to close off the new applications, and was probably gonna convert to a sacco. So we will just have to wait and see what happens next. banks were concerned because for the longest customers have not been getting great returns from their current and savings accounts. There was apparently mass withdrawal of money from financial institutions into this nyramids, and a lot of banks were not confrotable with thei dwindling deposit base.
Wonder what will happen once hedge funds come into the capital markets in Kenya? guess its high time those new products Mwebesa (nse MD) keeps talking about were introduced into the market ie. futures,options,short trading,margin trading etc. we are tired of just buying into IPO's and stocks that render fundamental analysis useless, as they get influened by the brokers. There is too much money chasing too few investment opportunities as it is, hence the nyramids sprouting up all over. Damn wish the CMA would just wake up and listen to ordinary investors, wonder what kind of legacy ntalami hopes to leave behind as CNA chairman?

Banks - Which publication do you write for?

Rugby world cup isn't realistic in the short term. I figure the best approach is to make Safari Sevens become part of the IRB 7's circuit.

For the safaricom fraud system to come into play, check out the official statement here http://www.subexazure.com/news&events/pressrelease2006_14.html

tried sending u an email seekin sme advice that i really need but it bounced back.
How cn i reach u if its ok?

Riba Capital: Nice writeup you did on stockbrokers.

Thanks for tip on MEGA. Equity did the same in before their listing.

coldtusker: They are paying, and WELL

Mashatall: I think they have fulfilled their finance requirements hence their reluctance to take on more. Even recent contracts were not as generous as older ones.

mwasjd: They ahve to try - they are only up against seven other countries. games can be played at RFUEA, Kasarani, some schools.

Unyc": My mail always gets through and I try and respond to all queries

I'm deeply skeptical we have the capacity to pull of the Rugby World Cup ...

hello bankelele,
I havent read your blog for a while,been sick but the Nyramid Scheme sounds like a A Ponzi scheme. A ponzi scheme is a simple scam in which a bankrolled, individuals persuades some people to invest money in a financial instrument. The investors do nothing but wait for a return. Soon, they get paid off! The buzz is incredible. New investors come in. The scammer now uses the new money to give more returns to the original money. This increasing return further increases buzz, which leads to ever more money coming in, which they use to pay off newer investors, and so on, until finally there's a lot of money coming in and the scammer disappear. its scary
~~~
if you are interested in starting a business in Kenya check out our blog and get your free membership to Kenya Small Business Resource Center where you will get the information, step-by-step guides and essential tools that you need to start and build a successful business in Kenya. find out more here http://kenyasmallbusiness.blogspot.com