Had a mini debate (with @matrixster) about the potential returns of investing with AAR or another medical sector firms in Kenya (if it is well run). Kenya and the region’s population has been steadily growing (good or bad thing?) and with more people accessing formal medical care would that not be a growth opportunity? While it’s tough to get true picture of the many private firms that operate in the sector, there has been quite a bit of banking and VC interest, with some local venture capital firms specificaly seeking out medical investees.

Kenya’s premier hospital, Nairobi Hospital, which is owned by an association of members, also have their results out for 2009. It is considered a hospital for the middle and upper class in Kenya and the region. But, you can also get admitted to Nairobi Hospital if you observe the Underwear Rule (hilariously illustrated here byKuweni Serious) 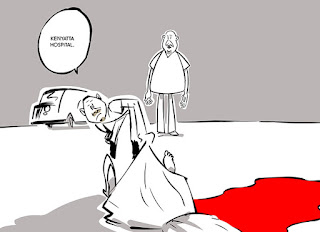 Anyway Nairobi Hospital, which is not a bad place to stay and recupearate ,had these illustrative numbers to ponder.

They promote their service locally and abroad; Since, in Nairobi, there are firms who advertise for medical procedures to be performed in India, the Nairobi hospital also competes for the same customers; last year they continued a medical tourism program that targeted 8 African counties and their teams made visits to DRC and Uganda, which may have contributed to their 50% increase in the number of foreign patients. Domestically, they participated in 16 expos and 36 corporate sessions, had open days (kidney, cardiology) and sponsored programs on Radio Waumini, and K24 TV.
Posted by bankelele at 1:50 PM

"...the Nairobi hospital also competes for the same customers..."

I'd hate to be thought of as a 'customer' when I'm in need of medical attention :)

Nice peek into the health 'business' though.

Hi its really very nice blog i enjoyed a lot to visit..Mobiles

Hello very useful information here in your blog i like it so much..Network

alextheafrican:OK, we would call you a healthcare consumer.
Banks: am not crazy about AAR as a consumer, but would invest if I had the $ because they have very little competition in the region. A lot of insurance companies that have health products apparently complain a lot about fraud, so I think AAR overcomes that by providing both the insurance and healthcare.

A lot of experts go to Nairobi for medical care, so I think it's a good sector.

alextheafrican: patients are customers, same way bodies are to a funeral home. anyway they have a robust system that is able to generate so much data - if you've ever been a patient there and got a very long (itemized) bill, you'd see that
- next peek is the church

PKW: true about fraud which has plauged the local medical scene, but there are more safeguards now - both good (fixed pricing, pre-approval of some treatment) and bad (delayed treatment, many ins. companies wont accept individual members, just groups like corporates)