Ever since the East African broke the story about France Telecom asking the Kenya Government (GoK) to reimburse it for more than the amount it paid to invest in the privatization of Telkom Kenya in 2008, its been an interesting tale - (summarized well here at Ratio Magazine) - and also confusing that a company invested in the mobile business – a component of one of Kenya’s fastest growing sectors (communications) until recently, could be struggling. Orange is also the exclusive partner apple for the i-phone in Kenya which is the world leading smart phone.

Market leader Safaricom is part of the problem as Orange, Zain and Yu have been unable to shake its dominance of the market whether voice, data, dealerships, money transfer.

That Orange expects more support from GoK as a shareholder is evident since they still own a majority (51%) of Telkom Kenya, compared to the 35% GoK owns in Safaricom. E.g. Orange, Zain and Yu have been lobbying hard for the lowering of the cost of a 3G license from the current $25 million which only Safaricom has paid (Kahenya wants proof that 3G was paid).

But lobbying to GoK against Safaricom is not always as easy since they are one of the country’s largest taxpayers and a vital cash cow that is a consistent source of revenue for GoK increasing expenditure. e.g In the two years prior to Orange arrival, Safaricom paid GoK direct and indirect taxes of 24.1 billion shillings ($320 million) and 18.4bn ($245 million) which is almost as much as the 25 billion that Orange paid for their investment.

Outlook: Looking at the Orange parent accounts (France Telecom) for 2009 year ended it appears that Orange Kenya has no value (invsted EUR 244m in 2007, wrote it all off in 2008) and is now also listed as an asset available for sale. 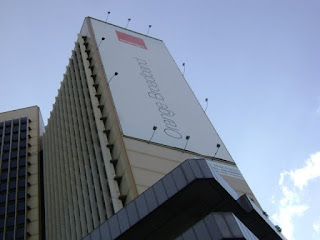 But Orange could look on the bright side and see that the market is changing while the rags to riches tale of safaricom success as told by CEO Michael Joseph may never be replicated, the market potential is there; whatever mistakes they have made in technology selection, product rollout, and marketing can be fixed. Joseph is himself expected to retire by the end of the year taking away an intangible brand impact from the company, and a compromise is likely to be reached with 3G license cost, EASSY fibre, inter-connection rates and number portability which will ease the environment for new investors Essar (Yu), Bharti Airtel (who are buying Zain Africa assets) and Orange.

Posted by bankelele at 1:10 PM

Interesting post but from the alleged (IMHO, ridiculous)demands the French are making to the GoK (their money back plus $300M Kenyan taxpayer funded capital injection) plus the fact that France Telecom have written off their investment in .ke, it all seems that they clearly want out. Not to negotiate any sort of compromise.

I think Yu is doing the right thing. Do have their numbers and how they are doing in the market?

Wondering how due diligence was done. Telkom K was at it's worst at take over time, and has (visibly) shown signs of improvement (cost cutting etc) , Orange did inherit a bad heritage but was managing to slowly peel that off. France Telkom though announced recently capital injection into Africa (clearly this market may be out of that loop)but hey..a space to watch!

Banks, Thanks! Nice well rounded one.

PeterGathunuku: I don't think they will pull out, but they want to pressure GoK to accede to other demands that will weaken Safaricom dominance. France & Orange are investing heavily in an African strategic race

Charles: Will check up on Yu (Essar parent) numbers

Grainsofmasala: Telkom has come a long way, spent heavily, shedding staff (unfortunate rotation of managers), ancient structures that it may be too early to see ROI. On due diligence the notes read "..The Group first recognized the identifiable assets acquired and liabilities
assumed and finalized this identification subsequent to the analysis of a physical inventory.." - which may be why they can't find some things they paid for and why others (even Safaricom) now say France Telecom over-paid

There should have been a clawback provision in the contract to take care of uncertainities.

hi friends .. i just wanted to invite you to visit my blog its all about cute babies and other things. thanks ...... COME ON ... a beautiful site. You will absolutely love it.

you got ur data right there bank,truth be told they did overpay n the orange staegies in are so far quite doubtful.they are investing in things that the kenyan market is not channelled to thus will unfortunately go on with the current trend of loss.if any1 is to pull out of this market,orange will definitely be first on the list.Essar is the biggest competition as far as Safcom is concerned.

Gathunuku is right: the Frenchmen are on their way out. From the haemorrhaging of managerial talent and other shenanigans, I'm predicting they don't last the year. Bharti steps in?

I think if Orange hang on there, they will be able to overcome the current state of affairs. They inherited better infrastructural presence and with a better strategy they can pull it off. I also think quitting is not an option in this case. That said, what the hell were they thinking? It seems they were so much in rush to seal the deal and spread their wings in Africa that they forgot that there some living devils around and if you are not careful you get conned on the spot.