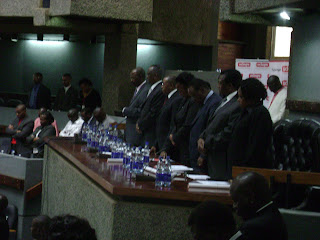 On 29th January 2010 shareholders of Uchumi Supermarkets [in receivership] held a meeting at the Kenyatta international conference centre KICC). It was not t really an annual general meeting as the Specialist receiver manger (SRM) Jonathan Ciano noted in his opening remarks. It was a meeting of shareholders, and he was a guest (angling to be CEO though). There is no board, but the reorganization task force sat at the high table as the board and the meeting chairman was the Kenya Government Solicitor General Wanjuki Muchemi. It was part company meeting, savings & credit/investment club and religious meet that one felt a sense of revival or resurrection [of Uchumi] whose receivership period may end early in February 2010 – after almost 4 years!

Investor Relations: Uchumi has been run like a company in all aspects during the receivership. Most important has been the way the SRM has communicated with shareholders, dealt with suppliers (given them as much preference as banks), and produced and published periodic financial accounts (both un-audited and audited) – a normal receiver manager only has to produce an abstract of receipts and payments to be filed with the government and the banks. At the meeting entrance all shareholders were handed a CD with audited accounts for the years 2006 2007 2008 2009 a/c [however, so far I’m unable to read mine – which is unreadable / corrupted] 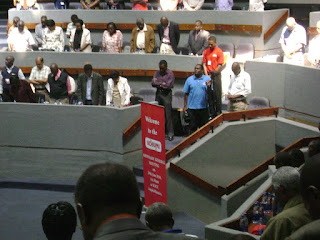 ‘Directors’ introduced included SG Wanjuki Muchemi, the permanent secretary in the ministry of trade, representative of Kenya wine agencies limited (KWAL), industrial & commercial development corporation (ICDC), Ernst & Young audit firm, and Kimani Rugendo (long term uchumi supplier and has spearheaded their negotiations during receivership) and others
SRM Ciano outlined the recovery steps turning round the company from 2006 [lost 750 million on sales of 3.5 billion] and 2007 [sales of 4.5 billion an a loss of 256 million], to 2008 [sales of 6.8 billion an profit of 95 million], and 2009 [sales of 8.2 billion an profit of 420 million]. At the time beginning of receivership uchumi owed 957 million to banks, 900 to suppliers, and 125 million to ex-staff, while today it owed 130 millions banks and 192 million to current suppliers while it has paid off all ex-staff. Also during the 7 months were closed in 2006, losses of ~150m were incurred
The Trade PS Mr. Ali also spoke, and then it was the turn of the SG. Solicitor General (SG) Muchemi said nothing was fundamentally wrong with uchumi when it collapsed, just bad governance. President Mwai Kibaki and government were determined that this icon of Kenyan business would not be allowed to die and he was asked to lead a task force to revive company (along with investment secretary Esther koimett and then-Trade PS David Nalo). He led the team re-negotiated all loans and leases and appointed SRM. He noted what US President Obama did to bail out US banks is exactly what Kibaki has done to revive Uchumi and that it was don’t in a unique was because traditionally in Kenya, companies that go into receivership, usually die (are liquidated, not revived)
The E&Y auditor read out their, and noted with an emphasis of matter that still the liabilities of the company exceeded the assets the 180 million. At the time they were appointed, the accounts had not been audited and they have now been able to audit accounts for the last three years for presentation to shareholders.
Shareholder Q&A
- Explain tax in profit. Yes its true, that Uchumi got a non-cash tax credit Kshs. 250 million that boosted their 2009 profit to 420 million. C
- Re-claim the Uchumi flag-ship store city square CRM said that matter was in court [where former directors of Uchumi have been charge in court with illegally selling the store] and being pursued by the attorney general and CID
- Is it the right time to exit receivership? All the things are in place proven record, and the banks (KCB and PTA) have approved lifting of the receivership if certain conditions were met.
- Negative balance sheet position Ciano said that’s 180 million down from 1.2 billion in 2006. He added that if shareholders approved the debenture conversion, government loan restructuring, and combined with Uchumi’s profits for 2010 (based on the six month numbers), the balance sheet position is currently a positive 594 million
- CSR activities of the company SRM explained that they are very active in this and spearheaded famine relief donations with several local stations among others

Other
I left early [after adoption of audited accounts and confirmation of Ernst & young as auditor] but it seems all resolutions were passed
- Shareholders approved the conversion of Kshs 211 million of shareholders debentures into equity , along with another 266 million from suppliers
- Shareholders approved restructure of government loan into long-term debt. SRM has applied to government to restructure their 850 million debt into 350 million of equity and 450 million to a loan which will be paid off in 4 years
- Uchumi will pay the remaining 130 million to KCB and PTA banks by end of the year
- Not sure who were appointed as directors
- Seems Trans-century are still interested in uchumi: The Transcentury Ltd group, which is chaired by James Gachui and whose directors include several men close to President Mwai Kibaki, is trying again with the executives of Uchumi Supermarkets Ltd. (...via africa intelligence) 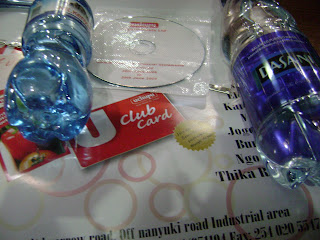 SWAG: small calendar, account on CD, and plenty of water to drink. It was a duel of local barons between former director Chris Kirubi (Dasani from Nairobi bottlers) and Kimani Rugendo (Mt. Kenyan brand water) and there was so much ~4 per shareholder seat
Posted by bankelele at 10:10 AM

What are the chances of Ciano getting the MD seat?
Was that part of the Agenda?
If so, what was the outcome?

hey, was good to bump into you this afternoon!

You missed this on Power lunch today

Im really tired of shopping at uchumi for all these years and I have yet to get dividends from my stale stocks.

I'm really hoping that this year's agm will be the last one without dividends and relisting.