The annual general meeting of Express Kenya was held on August 7 2009 at the Norfolk hotel.

A presentation was given by the CEO and transport manager which noted: 2008 was a year marked by post-election violence (PEV) which saw revenue decline by 13% (as they could not deliver to key contract routes in western Kenya), fuel prices rose by 27%, and the company suffered some PEV vehicle damage which insurance companies have not compensated (insurance co’s don’t cover political risk).

2009 outlook They noted that in the half year of 2009, sales and profits are ahead of budget; the company has undertaken efficiency measures taken include installation of vehicle fleet management & tracking system, outsourcing of some services, investment in new vehicles to support contracts, increase in warehouse utilization etc. By y year end they project to have a profit which will be distributed as follows: to pay down overdraft (31%), new investments (29%), dividend (25%) and cash flow (15%)

Shareholder Q&A Most of the questions asked related not on (lack of) dividends this time. Shareholders seemed to accept that the loss was justified by the election events and were convinced of management & board explanation and improvents since.

Hot button issue The company entered into the murky Nairobi city bus transport system through deals with two companies’ - Citi Hoppa and Kenya bus Services, and shareholders asked over half dozen about the investments. 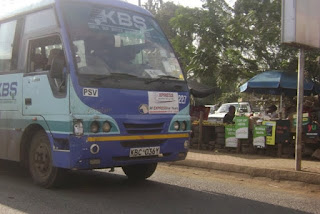 Safeguard Bus Investment
- How many buses? Express have 40 buses now that are shared among the two companies, each on the same terms. Other towns like Kisumu and Mombasa have requested Express to also launch similar investments there
- Are they profitable? Last year was trial; this year is performing better than expected – with good profits for the company. Express gets a guaranteed minimum daily income from each of their vehicles; anything above that and the management company gets a bonus. Money is banked into express accounts every other day and this is closely monitored. In future, they plan to have swipe cards and pre-pay systems that will better enhance revenue collection
- Express is now the largest single vehicle owner in the citi hoppa franchise
- Since it has succeeded when will they branch out on their own? Government has only licensed 3 transporters in Nairobi which probably requires 200-300 buses, so they have to work with Citi Hoppa, Kenya Bus or 2M. When the time is right, they may apply for their own license, but also they recognize that they (EXpress) don’t have the management team to run an independent fleet now

Fleet management & maintenance
- Express buses operate route only within Nairobi, and only on specific route e.g. 46 that have few potholes and they can do many trips with their relatively new fleet. This also means lower insurance rates.
- Bus maintenance by who? The vehicles are part of a complex partnership with Ashok Leyland. Express rents space to the dealer who also does all the bus maintenance at their yard. In exchange, Express get all the clearing business and bonded warehousing for the dealer
- One shareholder warned them they were dealing with someone (Juja MP George Thuo) who ran down KBS and built Citi Hoppa with the bounty. CEO said they did their due diligence at Citi Hoppa, and the buses, under the management of (Mrs.) Judy Thuo, are doing very well, even better than the KBS

other Q&A
Anchor shareholder commitment? Investor Chami questioned the direction of the company, commitment of the main shareholder & lending by a director, building purchase by the company, and asked what/if the anchor shareholder, who’s also CEO, pulled out of the company?
- CEO (Hector Diniz) replied that loan to company (205 million) is at 6% whereas a bank would have charged 18%. The anchor shareholders have built up the company since they took over 5 years, transforming it from being worth 200 million to over 1 billion, while producing profits from day one (and would have done so in 2008 if not for PEV and fuel prices)
- In new building, Express own 49%, while the Diniz group will have 51% and are sharing the opportunity and profit with shareholders (the building will cost Express 488 million)
- CEO is proud of results, shareholders have increased from 1,500 when they took over to 4,200 now, and the current share price of the company at ~9 shillings is not a true reflection of the company’s worth which he said is 20+ shillings. He added that once Safaricom lifts market, true market value of Express will show
- He told off Chami that if he sold his shares, Chami could also sell his or look for another anchor shareholder

Big Contract lost? when a shareholder asked if Express had lost a lucrative contract to distribute beer for Kenya Breweries, directors said they have not lost the Kenya breweries distribution contract in the 5 years they have been in charge. They briefly lost distribution in Central Kenya, but have now got it back. They also do Western Kenya (which was affected by PEV in 2008), have got 100% distribution for Alvaro (for which they will procure new small trucks), 100% UDV (spirits) and delivery of KBL products to AFCO (Kenya army) stores.

Director elections at the onset of the meeting chairman, Dr Chris Obura, corrected the notice of the meeting which had stated that three directors (including himself) were up for r-election (the printer repeated last years notice). So as a result only one director was up for re-election – and Mr. Moskovic was re-elected

Goodies one shareholder made a loud appeal for SWAG (there was none),saying the previous year they had got shopping vouchers and his family would ask what has Express given you – to show patriotism to the company?. After the AGM, tea and sandwiches were served outside the meeting hall, but that turned into a free for all grabbing match – when will companies ever learn?
KPLC is not good There was a delay of 15 minutes as the meeting started because the electricity cut out, and the Norfolk generator took another ¼ hour to kick in
Posted by bankelele at 4:17 PM

Interesting change of strategy there. I'd have thought the long-haul travel would have made a better business fit.

Coming from a country where the public transport sector is treated like a pineapple vending business, it's great to see Express Kenya set and example for the region.

Thank you for the brief. I'm sending it to a friend of mine whose buses ply the Kampala-Kabale route. He uses his buses like wheelbarrows.

Tumwijuke: please forward, big buses should be a feature in every major town. Note that these operate only within the city

great idea but those buses.... one. they are bot big, they are medium, indian buses have poor record in kenya, think swaraj mazda... no wonder they are only on route 46... those guyz dont ask for much... the company should consider 2m... they have standards, city hoppa and kbs. dont... almost guaranteed that those buses wont last.. look at the photo while they make money, they will soon be unroadworthy...

peter: those Indian buses are CHEAP... thus the idea wud b... use them on 'good' roads for 2-3 years then dump them on other operators.

As for long-haul... the Chinese buses are popular lakini I think they will be toast in 1-2 years.

Who remembers the workhorses? Leyland & Bedford...?