Thursday and Friday have seen a series of company annual general meetings (AGM's) for their shareholders. Thursday had Standard Chartered, and Nation media group, while Friday had Co-operative Bank, Diamond Trust, CFC Bank, and Scangroup.

With over 50 listed companies, why some days become so popular is a mystery; calendars can be spread out by the capital markets authority. It has been difficult for media and investors to keep up with this; media houses will perhaps give coverage to only one event (e.g. Nation mainly featured their own AGM), while a common lament of shareholders has been there are 365 days a year, how do these companies all pick on one day to have five different meetings?

Investors want SWAG: An excellent series of (3) articles on investor relations (IR) management in East Africa notes that retail investors are often there (at AGM’s) for the free lunch, not for company information.

And how do investors deal with the challenges posed these last two days?
- try and attend every AGM
- Dashing back and forth to attend all, spend as much time as it takes to get SWAG
- Send a friend or relative as a proxy to get SWAG while they do the same at another meeting

What is SWAG? The urban dictionary gives the best definition of SWAG which can be

promotional merchandise for a band, record label, or other entity in the music business, usually distributed at concerts. May include t-shirts, stickers, promo CDs, posters, etc. Often free, but not necessarily; a t-shirt or record purchased at a concert might still be considered swag, especially if it is a design or release that is not readily available in the mass market. The chief difference between swag and regular merchandise is that its purpose is not to make a profit, but to promote the band/label, and reward its supporters by giving them something cool and unique

Or
Stuff/Sh*t We All Get - Relating to the trade show convention industry, where exhibitors hand out "free stuff" to visitors. Most of the time these items are purely promotional materials, and are fairly worthless. i.e. pencils, mugs, and mouse pads. SWAG always has the company name, logo, slogan, product, service, and contact information clearly printed somewhere on the item/s

So SWAG is why many investors attend corporate annual general meetings. Don't believe that institutional investors and media attendees are immune to the lure of SWAG - they also get their own SWAG, often the same stuff (meals & promotional items) but at different more respectable venues.

Why SWAG?: Companies should not lament SWAG as being expensive items that are the price of being a listed company that has to satisfy hungry shareholders. A shareholder has to show up (or send a proxy a.k.a authorized representative) to get some SWAG. 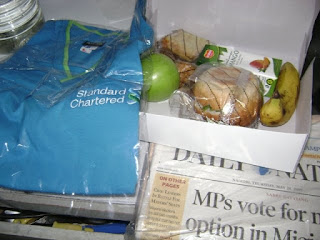 Attendees have to show up to get SWAG, those who are not in attendance or represented don't get any except the dividend which all shareholders get, but according to the number of shares they own. For many shareholders, their SWAG is much more than the dividend that their shareholding entitles them to

For the guest It is also a universally African concept to honour your guests with a meal.
For the host And for the company giving out SWAG this can be vital to the orderly and delicate flow of a company’s annual general meeting. Also, in marketing terms, a well designed, durable and branded cap, travel bag, t-shirt or umbrella, will be used to market the company for years to come in faraway parts of the country where even the company’s products are not sold, and long after the shareholder has sold their shares.

SWAG Costs: While the costs of SWAG items (from vendors like Vajas and San Valencia) has not increased by much, the number of shareholders seeking SWAG appears to have gone up significantly in these tough economic times. many show up for SWAG and don’t even enter the meeting hall and some companies acknowledge this by handing out SWAG before the meeting starts. And therefore the cost of hosting an annual general; meeting has gone up Safariom with 800,000 shareholders is probably contemplating the SWAG question for its annual general meeting set for august 19.

How can they minimize the cost of SWAG?
- have a meeting at a remote venue and hope few show up for it
- publicly announce that they are not going to be giving out any SWAG. But tough to do when well paid directors and executives are announcing billions in profits
- be stingy with the SWAG (Yesterday, the Nation Media Group gave out copies of their newspapers (Daily Nation, Taifa Leo, Business Daily and East African) along with a buffet lunch, while a few years ago they gave out gym bags & polo shirts with lunch and transport to the venue)

What's your opinion of SWAG?
Posted by bankelele at 4:16 PM

It would appear that a two-way matatu ticket from, say Nyeri to Nairobi would be more expensive than a small decent meal.

safaricom has already said it will hold its agm at kasarani. it expects about 6thousand folks to turn up... expects to be able to handle the traffic. in fact the only thing scaring those chaps is one alois chami who recently faced off with michael joseph ver the ownership of mobitelea at the annual results brief....

I think reducing SWAG to the bare minimum is the best option to reduce costs. or they do awaywith it all for good...and let AGMs be about the firm's business.

City Trust offered ZERO drinks, food or swag... LOL... chami wanted to beat up the chairman but hats off to the chairman who kept his cool & told chami to go home & wait for his dividend...

No food or drink, but perhaps discounts on goods or services offered by the firm would be the best.

Not to mention the option of paying dividends less than 1k as Airtime, between 1k-30k via mpesa & the rest via eft.

When you think about it, SWAG to some of these companies is chump change. Or they just chalk it up to publicity expenses - I mean so you hand out a number of branded items, and fill their bellies. Already these guarantees that they will be talking in positive light about you. And the branded merchandise will be used and reused until it falls apart and by then everyone will have known the story behind it and more.

PKW: I’m sure shareholders have other business in Nairobi that they do when they come for an AGM

Pierre: Michael Joseph has been asked about Mobitelea a dozen times and I still don’t know the answer

Coldtusker: SWAG is a way to pacify the crowd. But a company should only do as much as it can afford. They also will be asking for directors allowances to be paid, so if shareholders have no dividend, throw them a bone

MainaT: That has been suggested at KQ, but then – few of their shareholders do fly ;-}

Maishinski: But how would they load airtime into the phones? I think they will pay dividend by M-pesa

Shy: endless promotion from t-shirts, umbrella, caps for many years result from SWAG