The 2009 annual general meeting (AGM) of NIC Bank took place on Wednesday April 29 at the Kenyatta International Conference Centre Nairobi. (more on the background and recent performance of NIC)

The Chairman JPM Ndegwa (Chairman) led the meeting which began after the Company Secretary making some housekeeping announcements – mentioning lunch would be served afterwards but members should not litter the building as they eat, asked shareholders to switch off their mobile phone (a few still rang during the meeting) and that the bank had a marketing desk where their products would be on display for shareholders to ask questions and could open share accounts

Chairman Performs: The Chairman introduced the board and the management and representatives of S&F Bank of Tanzania who were seated at the side of the dais. He spoke throughout the day in a mix of English and fluent Kiswahili. He began by commenting that the 2008 AGM held at Safari Park Hotel had been quite crowded hence the move to a larger venue (bank has almost 25,000 shareholders)
Most important was how he controlled the tempo of the meeting, by stating upfront that only relevant questions should be asked and only as related to what was being discussed or voted on at each time. The result was one of the most constructive Q&A segments I have seen, with no frivolous questions asked during the session and the meeting progressing quite rapidly

Financial accounts 2008: the bank ended the year with a profit of Kshs. 1.48 pre-tax billion (~$18.5 million) and significant growth in assets deposit and loans. After the audit partner (Mr. Ndonye from Deloitte & Touche) read out their opinion, there were no questions and the accounts were approved!

Dividend: a final dividend of Kshs 0.25 for a total for the year of Kshs 0.5 was approved by shareholders. The voter elicited a couple of the shareolder to as usual ask for a higher dividend to be paid than the board had recommended. Another shareholder asked that, since the dividend was meager, could they be paid a bonus share?he clearly had not read or listened to the agenda

Directors fees – while you can’t compare the level of disclosure to shareholders at Stanbic (Uganda), the Chairman stated that the total sum paid to non-executive directors was Kshs 5.2 million ($65,000) – in sitting allowance for board & committee meetings. This was actually lower than the 5.36 million paid the year before last yearn and the results were plain to see. Vote was approved

Auditor Re-elections: the directors recommended that Deloitte continue in the accounting roles and asked shareholders to approve that; one shareholder asked if Deloitte was the only firm considered and if so why the Central Bank (CBK is bank regulator) also had to approve the appointment of the auditors – was there a problem with Deloitte? The chairman answered that they used other audit firms, and that there were provisions that firms could not consult and audit at one company and they were quire satisfied with the work Deloitte has done. He added that Central Bank , in looking out for depositors interest, also vetted audit firms employed by banks to see that they were competent (an aside is that the recent ‘enhanced rules’ for stockbrokers don’t specify their quality of their auditors or indicate that the CMA will even vet them)

Director Re-Elections: Isabella Ocholla Wilson and George Maina were re-elected as directors; so was lawyer Michael Somen who required was an extra vote since he is over the age of 70 years He’s the Chairman of Access Kenya, but it seems NIC have a habit of de-emphasizing their directors board positions on other companies

Bonus share : The next motion, for NIC shareholder s to receive 1 new bonus share for each 9 they own produced the first unscripted moment of the day and the hot button issue was again - rogue stockbrokers - three different shareholders asked the same question - i.e. NIC was giving them a bonus share, which they would be forced to take to a stockbroker who may sell this shares without their knowledge, or collapse with their shares/funds. The Chairman replied NIC Bank now had their own stockbrokerage firm NIC capital Securities where their shares would be safe. The war by banks against stockbrokers is still being waged in public – and a few days ago it was Equity Bank shareholders who were being given the same message –that their shares were safer with the strong commercial banks that they know and own, rather than with some small stockbroker

Purchase of 51% of S&F Bank: NIC is purchasing 51% of Savings & Finance, a Tanzanian Bank for a total cost of Kshs. 580 million (~$7.25 million). Continuing part of expansion and diversification since their 2007 rights issue that has seen them open branches in Kenya, an now make a cross-border investment ; the vote brought out the most questions of the day;

Q. exchange rate change since deal was announced; why is some payment in Tanzania shillings and some in US$?
- mix of currencies is s how the Tanzanian owners requested it be paid. - the shillings is weaker and they are now paying about 2.1x book value compared to 1.9x earlier. Also some S&F shareholders live outside Tanzania
Q. The owners seem to be family/private individuals:
- True most companies start with individual shareholders only - and the institutional shareholder is the East African Development Bank. S&F was started in the 1990's and it origins were in hire purchase business are similar to NIC. The shareholders with 49% are also going to be re-investing the NIC money in the banking, not taking it out.
Q. why is the bank attractive? Is it a leading bank in Tanzania – where does it rank?
- Tanzania has 28 banks and S&F would be between no 15 and 20. NIC felt they would get best value by acquiring a small bank and driving its growth. NIC directors did their due diligence, have observed S&F operations, got transaction advice and confidential banking reports from Tanzanian regulators confirming the bank was a good buy . It has 3 branches in Aruaha, Dar es Salaam and Mwanza which are all key trading points. MD added that - NIC was not the only suitor interested in S&F.
Q. How will it be run?
- S&F will have 7 board members – 4 nominated by NIC (including the MD’s post) and 3 by S&F (including the Chairman’s post - Abdulsultan Jamal). NIC have opted to retain the current Tanzanian MD – Suranjan Ghosh, Mark Bomani (former Tanzania attorney general) and Andrew Ndegwa (Kenyan NIC director) and James Macharia (Kenyan NIC managing director) as their four nominees.
Q. Other Kenyan banks have focused on Rwanda Uganda and Sudan- why Tanzanian (which has not been receptive to other Kenyan companies
-Chairman replied that Kenyans were the biggest investor in Tanzania (excluding the mining sector). Also in terms of diversification, the election violence of 2008 affected Kenya, Uganda and Rwanda equally - since countries were on same trade route! However Tanzania was a completely different market. A large untapped country with great agricultural and resource potential. Many NIC customers do business there already.
Q. Deal wrap up?
- Approval has been got from Central Banks of Kenya and Tanzania. After NIC shareholders voted to approve the deals, it is now expected to be wrapped up on Monday next week and S&F will become a subsidiary with their accounts consolidated in NIC’s from next month. 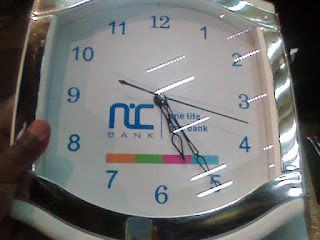 - Smart NIC had a boxed lunch served to shareholders (much easier to manage than any buffet and needs fewer catering staff). each box had cold roast chicken piece, beef sandwich, juice, water bottle, cup cake, and an apple.
Posted by bankelele at 8:04 AM

Boxed lunches...how economical. Seriously though, in these harsh times, you want to see signs of moderation not excess, so kudos to NIC.

I like NIC because it definitely charts its own course. And has sensible peeps leading it...
Still waiting to see how NIC Capital is doing.

NIC seems to have a unique strategic approach .. anybody got experience with their m-banking solution? Some salesguy was enticing me about the strength of their online and mobile banking

HEY BANKS AND ALL YOU ALL OTHERE... FOR THE UMPTEENTH TIME I AM TRYING TO DO THIS BLOG THING.. CHECK OUT MY 2 CENTS WOTH AND PLEASE COMMENT.. I NEED ALL THE POINTERS I CAN GET...

hello... you may submit this blog to my webBlog Directory, keyworddir.info.. have a nice day!