Equity Bank 2009 AGM (it’s 5th) was held at the Kenyatta International Conference Centre on Thursday March 26. This capped another year of spectacular performance by the bank during an otherwise difficult 2008 US$1 = Kshs 80 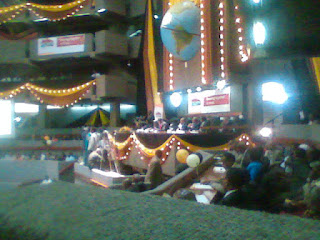 Start on time? Last Equity forum was 45 min late: this one was scheduled to start at 10 a.m. and was late by about the same delay. Last time we were entertained by an entire Boney M album, this time it was a series of advertisements for the bank, with a patriotic them recalling images of tourist splendor (majestic Mara), agricultural potential and athletic achievements (Kipchoge Keino, safari rally, safari sevens rugby) all ending with the line we are proud to be Kenyan

The Chairman took up a long time by reading his entire written speech – almost 20 minutes. He handed over to the CEO who also ran down a series of financial highlights for the year including;

Speech also took about 20 min as he added:
- All the awards the bank won in 2008 (Euro money, Africa Investor) which were on display for good measure
- The bank is a case study at Columbia, Harvard, Stanford, IESE and Lagos

Fun stuff at AGM's is always the Q&A with shareholders:

Bad blood in banking sector one shareholder commended the bank for the fight-back in his area (Machakos) where a rumors led to a run at the branch, and a team (with cash) visited to reassure residents that the bank was strong. The bad blood was attributed to competitors who are jealous of Equity’s bank success - CEO mentioned a proverb of a tress that grows taller than the forest canopy and then gets buffeted by winds from all directions. He said they can withstands such challenges because of (i) capital of almost 27 billion (ii) liquidity of almost 66% and (iii) good asset quality

Why borrow foreign funds? one shareholder asked why the bank borrowed. The lines provide long-term funds for long term lending 3-5 years). E.g. a German loan was to support investment in irrigation schemes, of which there are now 3. CEO assured the shareholders that the loans from (Dutch, French, and German institutions) were all denominated and would be repaid in Kenya shillings, cushioning the bank from exchange losses

Most generous company in Kenya one shareholder asked why the company did not publicly participate in corporate social responsibility (CSR) programs? CEO said that Equity, unlike other companies, which gave a little money with a lot of publicity, was actually the biggest corporate spender in Kenya – bigger even than the Telco’s (Safaricom?, Zain?) and gave some examples
– when they opened 4 branches in Nyanza in 2008, they donated 20,000 beehives to women’s group’s as well as 10,000 avocado seedlings –avocado’s and honey were the most promising products of the region (i.e. beehive can generate 36,000 to 48,000 annually) .
– in Eastern province, they donated sorghum seeds to the residents of Ukambani – and will partner with east African breweries (EABL) to ensure that harvest from the residents will be bough by the beer giant.
– In the education sector they sponsored 186 top performing high school student by paying their university fees at a cost of 112 million shillings
– Fanikisha loans (to women groups) has become their flagship product with over 187,000 loans, and in agriculture disbursed 70,000 new loans in 2008
This kind of CSR that Equity engages in, is not publicity, but it is actually sustainable and transform lives by giving individuals the power to generate incomes

Regional diversification Uganda was a takeover, Sudan is a green field and they will watch the growth to see which strategy is better for expansion to other African countries.
- Uganda starts operations at end of March with 30 branches (the biggest branch network in Uganda), and open another 20 this year – he said they had already increased profit by 100 in the second half of 2008 since they took over, even while doing a re-brand operation. CEO said Uganda had better growth prospects than Kenya which had a lot of negative politics
- Sudan starts in April
slip of the tongue? CEO at one point said … “...when we open in South Africa” while also mentioning looking at Rwanda and Tanzania as being next

Buy other Banks? one shareholder asked that they buy up more shares in housing finance, while another suggested they also buy up National Bank of Kenya in which the government is offloading more shares. CEO said they would do their due diligence on NBK and if they were announced as being in the running, shareholders would know soon, but if not, then there was something they did not like after their analysis of NBK (as far back as 2005, Equity have been interested in NBK). CEO mentioned that RBS of Scotland took over a bank before the economic crisis, and choked on that toxic investment that has reduced its value to a mere fraction (from $119 billion to $3 billion)

Enough bad loan provisions? these increased from 600 million to 1 billion, but was that enough one shareholder asked, considering that some of these were for Safaricom shares? CEO said they lent individual 80% for Safaricom shares with investor paying 20%, then the over-subscribed IPO allocated just 21% (which the investor paid or), and so the 1% loan was repaid in the first week

Poor bank netwoek systems one shareholder complained about the downtime of the bank’s IT systems – at branches or at ATM’s which perhaps led to people saying the bank was shaky. CEO said they have been upgrading the platform over the last few weeks and it has caused some hiccups but they would be over. Equity is now branchless, you can bank in Kenya, Uganda, and Sudan seamlessly. Also look for new branches as queues and crowds will no longer be an issue

Kenya immune from global crisis? CEO said in year 2000, Kenya economy shrunk by 2% while equity grew by 100%
- stock market dipped in 2008 as foreign investors (who constitute 70% of trading) left the NSE, but they are now coming back
- said Kenyans were being scared. there are no toxic loans in the sector. If Kenyan economy get by 2.8 in 2008 and is expected to grow by 3.6% in 2009 , and even though tourist number and export will be affected, overall we should not unnecessarily panic about... except in the capital markets

Argument against being a stock-broker one shareholder asked why they did not buy a stockbroker like NIC (bought Solid stockbrokers) and yesterday Coop bank (bought into Bob Matthews stockbroker)? CEO said that not going to happen as stockbrokers have such bad reputations and toxic assets. Equity already has a custodial license, they already employ 8 stockbrokers, and get 70% of the transactional income – so why the need to become a broker? They get the profit now, without the hassle
- said as custodian, they are the largest custodial account holder with over 50% of all CDS accounts in Kenya
- he exhorted all shareholders to transfer their shares from their stockbrokers to Equity Bank.

Share split
can’t be selfish when doing well
- Special Business was the share split that every ordinary share be sub-divided into ten shares
- CEO explained that shares had become too expensive at the Nairobi Stock Exchange, which made it difficult for shareholders to judge their true values. E.g. to buy minimum 100 shares of equity costs 12,700 while to buy KCB costs 1,700 and co-op just 610 shillings
- company has 10,000 shareholders and 3.5 million customers. The share split will enable more customers to become shareholders
CEO gave history of bonuses and splits
i Year 2000: share split- 1 share sub-divided into 4
ii 2004 bonus - 5 bonus shares for each one held
iii 2007 bonus - 3 bonus shares for one held
iv 2009 split - 1 share split into 10
- so if you had one share in 2000 worth 20 shillings, that share was now worth 7,500
- the register closed yesterday (march 25) and the new shares start trading on May 25
- CEO exhorted shareholders to hold on to their shares, as they could be expected to go from the current 13 (130) to 34 (340 was the previous high before the bear market)


Odd moments
- Managers and board were asked stand and bow to the shareholders
- CEO was at one time referred to as chief servant
- CEO seemed to delight in the woes of citi bank and the US banking sector
- Meeting started and closed with a positive prayer by Canon (priest) who obviously must be a shareholder too.

Summary
Nice AGM. Equity is now media savvy and the event was well attended and covered articulately by the press
Posted by bankelele at 8:33 AM

Here's me feeling like I was in that very hall!

This South Africa thing(slip of the tongue)

Any idea how it is for other African countries trying to do Business there?

What toxic assets are stockbrokers holding onto? explain further.

Laughing at Citibank? We'll be laughing at Equity soon.

Banks-tx as always for the AGM updates, imho tends to be your best blogs. I think the regional space is where the game is next. Equity is looking for 40% of PBT from outside Kenya.
Anon-niwewe ulikata bet?

Btw, looks like Equity has some intelligent shareholders going by the questions. Anybody ask what Equity intends to do with HFCK? I'd prefer selling it but presumably there must be a plan to seek a return on investment.
One of the advantages of having a fairly young and intelligent CEO is that he has grown up seeing how you can play the media game.
Equity reminds me of Japanese MTNS when they were growing big. Stealth but very well organised.

Chebet: try and find out more, that would be a home run for Equity

MainaT: you're welcome. They took up more HFCK shares in the rights issue and I see a huge opportunity for lower and middle income mortgages which no bank is really funding now

Thanks, Bankelele for the detailed review.

People people. this bank is tribal to the core. all one has to do is look at their website. 99% of the senior managers are from one region. I was shocked they even got rid of a Samburu head of HR, just like they had of a Kalenjin lady in the same department. Of course he replaced them with a ph.d holder from the same region. Is it just me or is James Mwngi that rotten?