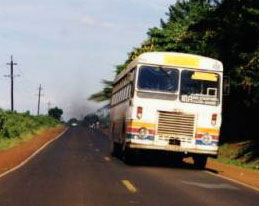 After Uchumi, the next urban icon likely to go down in the face of faster, fitter, and smarter competition may not be a surprise.

When Citi Hoppa shuttles first appeared on the Nairobi scene, they were outnumbered about 10 to 1 by big blue Bustrack buses. Now it’s the other way round with the ever-expanding fleet of green citi hoppa's outnumbering the reduced fleet of road-worthy bustrack buses still on the road by about the same margin.

And like Naukmatt over Uchumi, Citi hoppa's aggressive drivers seem to delight in overtaking their creaking, struggling, blue-bus competition (which also break down often) especially as they climb hills and race to pick up passengers.

Bustrack/KBS, which seem to have withstood and adapted to the introduction of Matatu’s to the city, have not been able to adjust to the Citi Hoppa onslaught.
Posted by bankelele at 10:41 AM

KBS/Bustrack is certainly headed in that direction. Uchumi was a disaster waiting to happen. Pity we don't have anyone pursuing the architects of its failures in the manner that Emron's crooks are currently.

@kenyan analyst
have just lost some money in uchumi so yes we do need someone to hold whoever runs public companies accountable
@bankelele
might you know what regulations cover insider trading. (given that if i knew the CEO's PA and somehow knew uchumi was going to be bankrupt i would definately have long sold off my shares

Uchumi...very sad indeed...especially since they imported that CEO 4m SA & i'm sure he was compensated big time.

Finance 101:when a company closes down, do shareholders COMPLETELY lose their investment???

There is actually very little that will happen in regard to finding who milked Uchumi and took off with the loot.
The best investors can fight for is more accessiblity and transparency in accounting reports and really we need a class of more sophisticated analysts.
People should have seen this coming: after the IPO last year the CMA and the market at large should have observed the companies activities and I am sure this would have been averted.
Needless to say people were still speculating on the stock even on it's last day of trading.

IOn the Bustrack and Citi Hoppa saga, the Citi hoppa, despite having increased its fleet, they are unable to meet the demand, you only need to stand at Kencom and see the long queue that runs roung the KCB building. Also they have been overcharging customers, how do you say of being charged Ksh 30 from the city to Valley Road.
The governmnet should bring a new company to run replace the Bustrack and end this monoploy

Rumour has it that a dude investing in Citihopper is actually an ex Bustrack employeee and he did the unthinkable before starting out Citi hopper.

But then it's a rumour not verified.

From the little i know on Uchumi, the company was milked dry when Chris Kirubi was in office.

"Uchumi has been ailing since 2001, when its board, then led by Mr Chris Kirubi, engaged in an extravagant expansion programme that eventually pushed the company into a cash flow crisis and finally into the red."

Kirubi is also the owner of Haco Industries & my pal 4m Haco told me their products (even slow moving ones )were forced onto Uchumi shelves.

@ Anonymous
The dude you are talking about is George Thuo-current MD of Citihopper and former MD of KBS/Bustrack.He was involved in some scandal b4 being fired from KBS.

yup, chris Kirubi is the culprit at uchumi and he has the guts to say this
http://www.nationmedia.com/dailynation/nmgcontententry.asp?category_id=3&newsid=74328
anyway i wonder if ts possible to buy shares priavtely now coz i think uchumi has lon term possibilties i possibly see some south african taking over abmnd ican get the share s for pennies

I doubt chris would implicate himself in the collapse of Uchumi. The queries have to be specific

has a link to an interesting letter an ex-employee wrote regarding the fate of Uchumi. I wasn't able to post the link on the comments section i.e. I do not know how to!

KBS woes actually amplified during Thuo's tenure. Ever heard of an MD doing business with his/her own company? The guy literally gave KBS with his right hand while siphoning off with the left. Only in Kenya do corporate crooks freely hop into new businesses, including competing with their former employer.

Shouldn't we have a law restraining former executives from establishing businesses that are direct competitors to their former employers, for like 5 years?

Anyhow, Citi Hoppa is a political business, just like KBS (after the British), and will not survive long. They will cream off Nairobians then move on as political power base shifts.

@Kagz I dont disagree with the fact that Kirubi milked uchumi, but that is an issue the board decided to let pass. They ought to have prosecuted him immediatelly he left the firm.

What is puzzling is after they collected 1.3 billion in the IPO, they reported debts of Sh646 million at the end of the year and currently they have Sh775 million in long term debt. Thats 129 million of long term debt acrrued in the last 5 months ???

For any stockholder the fundamentals were not right. It is alleged the management couldnt respond to all queries from the auditors and this is whrere we should take issue with the CMA for not having suspended the stock and ordered them to come clean.

Assets are 1.8b
Debts are >3b
suppliers and banks will loose around 1.2b before we even look at shareholders' losses.

IT is very sad that people like Chris screw peoples lives and they continue enjoying their ill gotten wealth. It is true many other Kenyans ran down firms and have have nothing to show for it but that does not mean that Chris is a celibrity. Uchumi investor will always remember who screwed them.