Another reason for my on-going new car search showed up over the weekend. I got ready to attend a wedding, but as I tried to leave for the Church, the car would not start. Since I was all dressed up, I didn’t bother tinkering with the engine and just left the keys at home and started a three-matatu trip to the wedding. 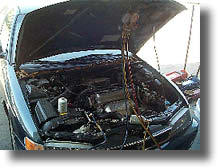 call me mzungu
The wedding was card only and was at a posh hotel on Thika road. I arrived there a full half-hour before the wedding was scheduled to start and sat to have a beer and read a newspaper while I waited for the other guests. 30 minutes later, I was still on the lawn with a handful of guests as watched preparations continue unhurriedly. Organizers of the wedding were sipping some drinks that clearly were not sold at the hotel and it was clear that the wedding was not going to happen any time soon. Having had one drink from the hotel at 200/= I decided to step off the grounds and take a cool down at a more affordable place and I made a long waslk to a joint called Fifi’s that was recommended by a friend.

Fifi's is a nice joint next to the gate of the USIU campus and had an inretsting mid-day crowd – a mix of dreadlocks whcich seemed to be the hairstyle of choice for men there, while some girls dressed like they just got off from K street. The guys playing pool were very good - accurate shooters with their own personal cue sticks, while other patrons put their student bags on the bar-counter as they sipped their drinks. I had 2 drinks there as I finished my paper bedfore i retuned to the hotel. I was back at the service 90 minutes after it was scheduled to have started but i still arrived just as the bride was finishing her walk up the aisle. This African time is quite common at weddings but is sometimes frustrating especially towards the end of the year when people often plan to attend two weddings in a single day.

he who is without sin
Anyway after some singing, the pastor proceeded to give a sermonette before he proceeded to the vows. He described the couple in wonderful terms, as good people, who had ‘ministered to’ for a long time – but they went astray and she got pregnant! – but who have done the right thing and decided to get married today

This shocked me because I know the bride well, but only found out a few days ago that she was expecting. She’s not showing and her condition was not visible even with the trim white dress she wore at the wedding. The couple appeared unfazed but this but I was shorrified at what i felt was an intrusion in to their privacy and a permanent smear on their big day. The pastor had no tight to make such an announcement and this should have remained a private matter. Several weddings that I have attended have been followed by arrival of a baby before nine months.

Good people can make bad decisions or get into situations and some churches need to accept some facts about modern life today and should adapt if they wish to retain their congrerations and members.

bootleg country
Back in town I took a walk around and discovered the beauty of bootleg DVD’s. The popular packages now are star packs where you’ll get 5 of Julia Roberts, Denzel, or another stars' movies on 1 DVD of reasoably good quality for 500 shillings ($6.85). You can also get an entire season of the Sopranos or Friends (13 episodes) on 1 DVD. The DVD's are put together presumably in the Far East, and have misspellings like “the best of Van Disel” or the movies are combined without logic – I found a DVD with Blade 3, Oceans 12, Alexander, Forgotten and the Grudge.

The Kenya Revenue Authority also plans to clamp down on the importation of second hand phones which are often brought in duty free as personal items but end up being sold around the country.

from dusk till dawn
The next morning I went to Choices at about 8 a.m. to watch the grand prix live from China. There were many vehicles at the entrance already and mush noise on the street. When I entered, I found that this was from a group of about twenty laughing and very drunk young men and women who were being escorted out of the club after a night of drinking. The vehicles at the front were eager taxi drivers all waiting to drop these people home. The patrons were in no hurry to finish up their drinks, and kept pestering the watchmen to buy one more beer or allow them back in to use the bathroom. After a few minutes they let us in (i.e the sober people who had just arrived) and we watched a great race – after which I continued my car search at dealers in Nairobi West.

Only in Kenya
On a matatu ride back from Choices on Sunday morning, I sat behind the driver, and there was a box-stationed on the spacious ledge in front of my seat. It appeared to be nudging my leg, but I didn’t pay attention to it. It wasn’t till I was almost home that I looked down at the box, which a carton, with a hole in one top corner – and sticking out of the box was the head of a live chicken. It was being taken to someone’s house, obviously as a Sunday afternoon gift or dinner, and it kept looking up at me. It appeared to be having difficulty breathing in the stuffy vehicle, and it kept opening and closing its beak. I felt sorry for the bird, and felt like turning round and offering 2 or 300 to the owner of the bird so I could buy and release this chicken to freedom on this special Sunday.

But my humanitarian moment was spoilt when I realized that I was also holding a take-home lunch consisting of chips and fried quarter chicken from kenchic.
Posted by bankelele at 3:21 PM

that preacher eish..he just put the couples business out there on their big day. so wrong

enjoyed the post. I agree with you, that preacher was mannerless.

lol Van disel! Were the dvd's clear? The ones i tried here were crap.

Its amazing the contrast- Very Superior Hotel; Mboff & Mannerless Pastor; African timing and the guest who opted for the Fifi's lounge! lol!

Interestingly in my culture, men are only to marry a chile after confirming that she is fertile (i.e. not barren), so this Pastor would not enjoy our marriage ceremonies- huku with childred littered around the holy couple!

Bootleg Dvd's- if these things weren't being supplied to us wananchi, you may as well stop selling DVD machines! We are that dependent on them! The only biff may be the lack of special features in the real bootlegs.

Msanii_XL: preacher was way wrong. Maybe i'll get this DVD-pack now to see how good Forgotten is and how bad Alexander is.

Afromusing: agree on Preachers' bad manners. The movies are ok mostly, but sometimes they skip a few minutes and when its an action movie, you'll see pixels/blur instead of sequence.

Kibet: Fifi's was great, and I could have had 3 cold drinks for the price of 1 at the hotel. Sometimes we benefit from African timing since we usually run late ourselves. And bootleg DVD's lack extra features even though they are sometimes listed on the menu.

Fifi's....That was the joint when my friends were at USIU. And if the wedding started 2hrs late, I'd consider that being 'on time'!! Ahhh...the memories. Haven't heard about K St. for some time too...Enjoy those experiences!!!